We finally slipped our lines and left Holyhead for our journey south on Saturday in fine weather and motored south, as we had south westerlies winds, to Bardsey Sound. As we approached the tip of the Llyn Peninsular a heavy sea mist shrouded our passage way but approaching Bardsey Sound it started to clear and the tip of the Peninsular appeared through the mist. As we progressed through the Sound Bardsey Island appeared ethereally to the West with a setting sun. 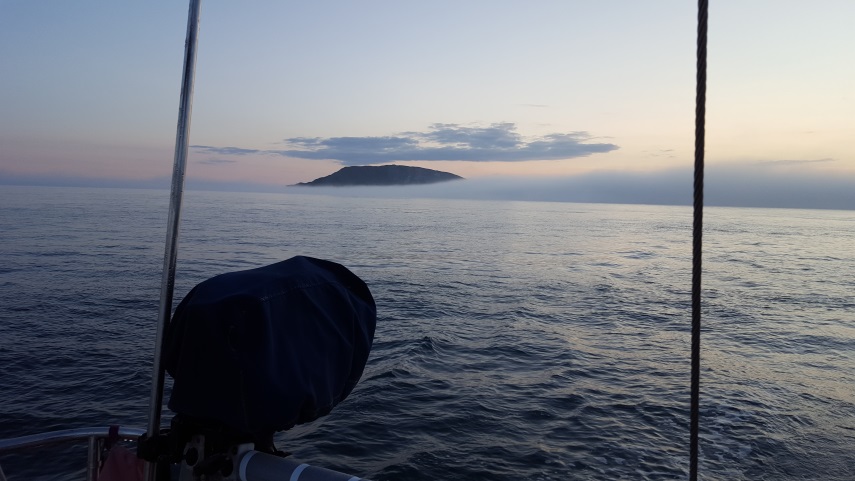 The heading was Barmouth but the coastguard advised against late arrival so we headed to Abersoch for the night. Arrived after dark (22:30) slowly nosing our way through moorings and dozens of boats off South Caernarfonshire Yacht Club and found clear water for anchoring. We anchored to the strains of the Saturday night disco drifting across the water. It was a peaceful night. The next morning we surveyed the numerous small craft moored around the SCYC that we had negotiated before anchoring.

Weighed anchor at 9.00 am and headed to Barmouth arriving for high water to cross the bar. We were escorted to our mooring by the coastguard as the mooring had lost its rope and they were there to assist. Took a water taxi to the shore in the late afternoon to explore the town but were unimpressed (Rhyl springs to mind). Had a swim off Shantih’s swimming platform and a hot shower to warm up. The next morning prepared lunch of soup and sandwiches for our journey to Aberdovey. Left Barmouth, heading Aberdovey, at noon crossing the bar with 0.8 of a meter below the keel. The strong south westerlies and incoming tide made progress slow and we estimated arrival at Aberdovey bar would be too late to cross safely into the estuary. Turned around and headed back to Barmouth for a second night. Decided that a train journey to Aberdovey was a good option to find a chandlery and look at the town. Before leaving the next day we had a leisurely start with another swim, hot shower and breakfast. Thankfully the sun appeared briefly when I got out of the water providing much needed warmth. Cast off to cross the bar by 14:00, heading Fishguard. An hour into the sail we were called up on the Radio by Aberporth Marine Control asking us to change our heading as we were heading into a live firing exercise. This put us on a less favourable tack which delayed out arrival in Fishguard. Arrived just before dark, picked up a mooring and went below for dinner.

The night was peaceful but I slept badly and started to feel unwell. David slipped the mooring and we headed for Dale. I missed most of that sail as I increasingly felt unwell but managed to surface to come through Ramsey Sound and into Dale. The weather was sunny and calm, not much wind so motor sailed. Managed to eat something and we picked up a mooring. Unfortunately I was progressively getting worse with a terrible headache, nausea, stomach cramps, pain behind my eyes and inflamed nasal passages. David called the coastguard who put him in touch with a doctor in Portsmouth who recommended ibuprofen and paracetamol and a check over by a doctor. The coastguard sent the lifeboat with paramedics which arrived in 15 minutes. The paramedics checked me over and suggested that because of the severity of the symptoms I should go to A & E in Milford Haven and I would probably be admitted for a night. So packed an overnight bag and went aboard the lifeboat. When we arrived in Milford Haven the ambulance hadn’t arrived so we waited for nearly 2 hours. Meanwhile David brought Shantih into Milford Haven marina. Everyone was so helpful but by midnight the ambulance still hadn’t arrived and there was a 3 hour wait. The pain had subsided sufficiently to decide that it would be better to go back to Shantih and try and get some sleep.

The next morning we spoke to the Marina office and they gave us details of the nearest doctor and we made an appointment. The lady in the Marina office said that there had been a great deal of comment about the fact that the ambulance had not come and that even the police had not ever heard of an RNLI casualty being left stranded without the proper emergency response. The doctor checked me over and found nothing wrong with all the usual checks, temperature, heart, breathing, ears but parts of my abdomen were incredibly painful when applying pressure. He advised continuing with the ibuprofen and paracetamol and to return if things got worse. Stopped at a lovely teashop and had ginger and lemon tea before heading back to the marina. Such a lovely teapot and china cup. 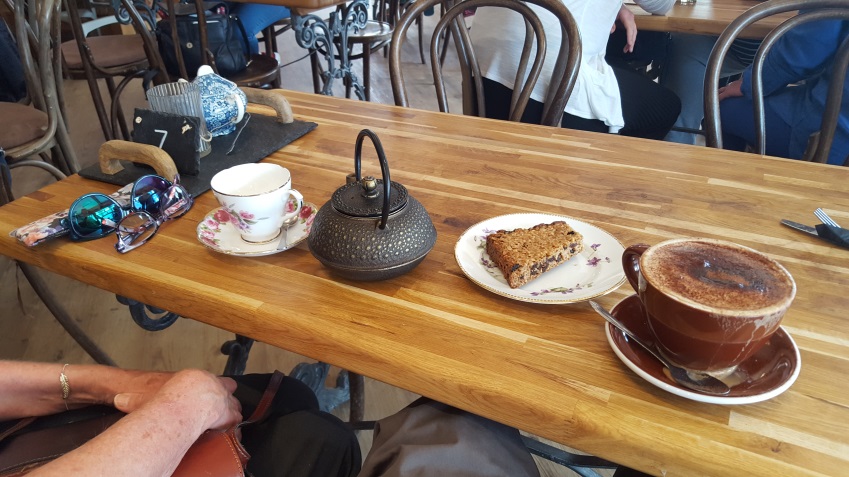 The following day we left the Marina at 10:00, after a hot shower, for the dock opening at 10.30. I was feeling considerably better thanks in part to the pain killers. We set our sails for Padstow with a good north westerly. We couldn’t believe that just after clearing the main channel out of Milford Haven we were accosted by a safety patrol rib asking us to adjust our course again to 180⁰ as we were steering into another live firing area. After some deliberation we decided to comply as we could have been blown out of the water!! Thankfully this was for only an hour and we were able to return to our original heading to Padstow. Set the spinnaker and cruised for a while at 8+ knots in force 3-4. 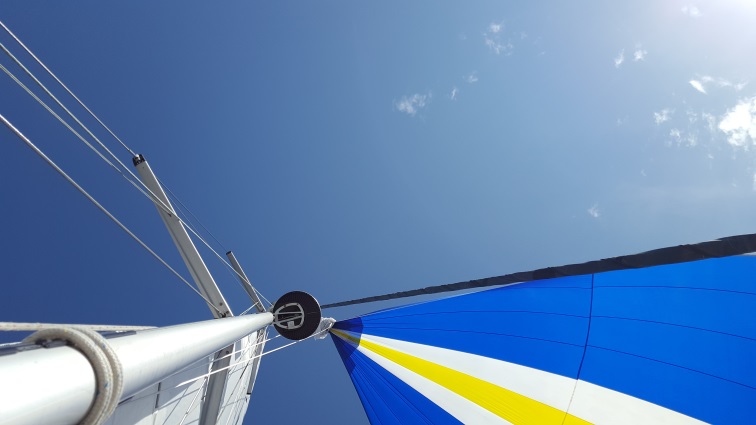 We watched the sunset as we passed Lundy and could clearly see the Cornish coast; Padstow an hour and a half away. As darkness fell we plotted our arrival at the anchorage close to the channel into Padstow after eating vegetable curry with a fried egg and chapattis. It was a starlit night with a waxing moon to light our passage between Rayner rocks and Pentire Point – quite lovely. Arrived at the moorings to find none free so tied up against the Jubilee Queen for the night. Went below and to bed. Unfortunately I had terrible stomach cramps in the early hours (it wasn’t the curry) so again was concerned for my health but did get back to sleep as the pain finally subsided. Woke to a beautiful calm sunny morning. David swam briefly off the swimming platform as the tidal current was very strong. I reluctantly declined as I had been so unwell. At 15:00 the tidal gate was opened and we came into Padstow tying up stern to the pontoon next to a Grand Soleil called Belladonna!! 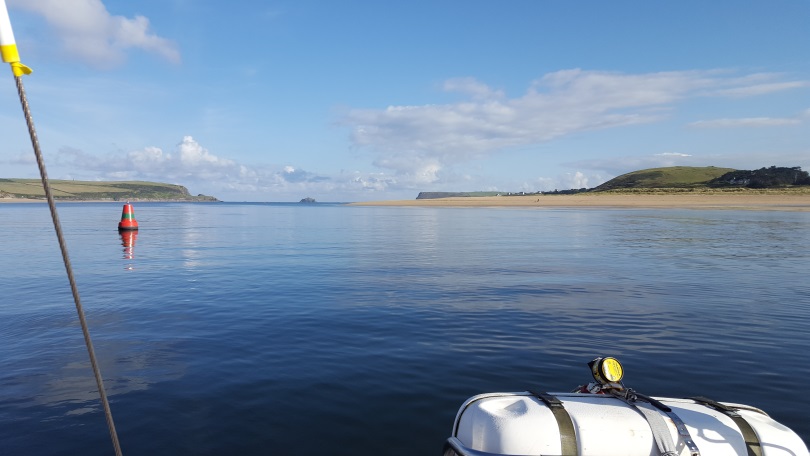 Went ashore and had Cornish pasties for lunch. Had a delicious meal at Pucellis Italian restaurant yesterday evening and mercifully I was able to eat without any discomfort. Last time I ate at Pucellis was 12 years ago when we bought Shantih and were on passage to Holyhead. It didn’t disappoint second time round. Sunday has been very wet and has been a washing, blogging and recovery day. Here for three days before arrival of fair winds for the Scilly Isles on Wednesday.